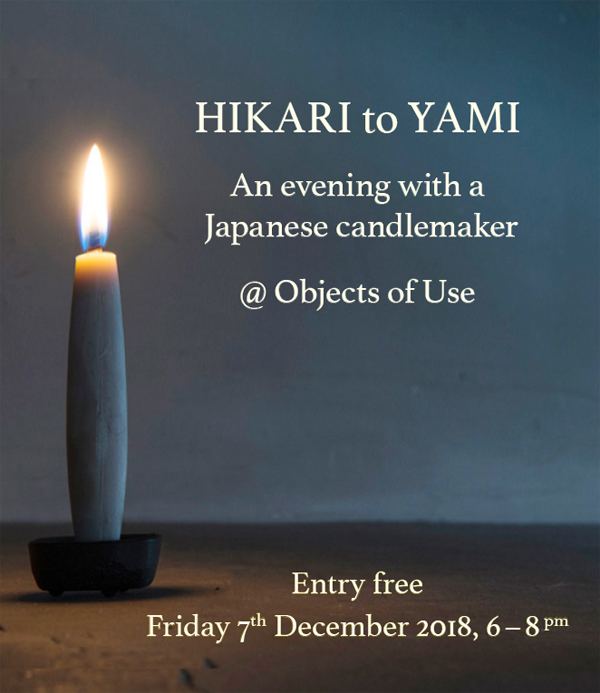 As the nights draw in and we look for beautiful and comforting ways to light up our living spaces, we're looking forward to welcoming our guests from Japanese candlemaker Takazawa, who'll be coming for one special evening to our store in Oxford. Takazawa Candle was established in 1892 in Nanao, Japan — to this day they continue the traditional crafting of candle-making using vegetable waxes and washi paper. Come along and learn all about the fascinating history and processes involved in the production of their beautiful candles, made using ages-old techniques and processes, with a real reverence for the natural world and the ancient art of candle making.

The first candles in Japan, brought in from China in the 8th century, were made from bees wax, which was not at that time a familiar material, so they experimented with making candles from wax derived from plants. Sumac wax was found to be soft and easy to form into the shape of a candle, and so by the 16th century it had become the standard material for candle making in Japan.

Takezawa candles are renowned for their bigger, brighter flames. The flame comes from a special wick made from a unique recipe dating back to the 16th century, and it is felt to be a symbol of ancestral wisdom. At a time when there were no electric lights, candles were of great importance, and much effort was put into making candlelight brighter. The Takezawa wicks are made of washi paper rolled about a rush skewer and the body built up by rotating this in the right hand whilst the hot wax is smoothed about the shaft with the left — a rarely practiced traditional art known as kiro-tegake-seiho — before the top is shaped and the rush removed leaving a hollow core.

Sumac wax from the Kyushu region and Japanese paper (wa-shi) from Iwami (in Shimane Prefecture), used for wicks, was historically brought to Nanao to produce candles. The finished product was then transported throughout Japan by Kitamae ship. There were many guilds, which made candles, in Nanao until the late 19th century. Today, Takezawa are the only candle maker keeps this tradition alive in Nanao.