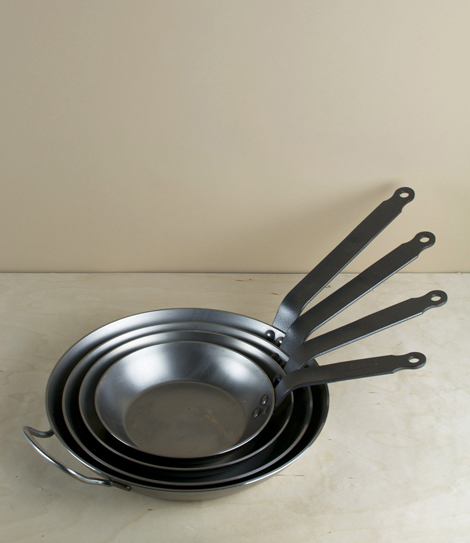 Most of our French frying pans are made of 2.5mm or 3mm pressed carbon steel. They are untreated save for light coating of oil to help prevent rust during transport and storage — the grey colour is simply the colour of the raw steel. It might seem obvious but it is still worth reiterating that until the pan is seasoned it should be kept absolutely dry and the protective oil left in place. If allowed to get wet, or stored damp, this is the time that the steel is most susceptible to rust as the pan is yet to develop its own protective coating.

Does it matter if it rusts? Not really except for the sake of appearances, functionally it shouldn't make a difference - indeed there are those who deliberately rust their pans, blacken the rust by boiling, and then season believing it results in a truer, harder surface than the simpler method described below. If any rust does appear probably the best advice is to scrub off what you can with a scouring pad, a copper cloth, or brass wire brush. We'd suggest avoiding wire wool or sand paper as these are likely to either polish or roughen the surface. The result will be slightly patchy, but as the seasoning builds and the pan blackens any uneven colour will gradually disappear.

Having kept the pan dry until you are ready to go, the first thing to do is to get the pan wet. You need a bowl of hot, clean, soapy water and a sponge or a soft washing up brush. Wash away all the protective oil that's on the pan as it is the wrong kind of oil (a non-drying acid free oil, most likely a light mineral oil), used because it doesn't go rancid, evaporate, corrode the steel, or degrade. Despite these virtues it isn't what you want so you need to gently, but thoroughly scrub it away. Then having done this you need to rinse well until no trace of soap (or oil) remains. 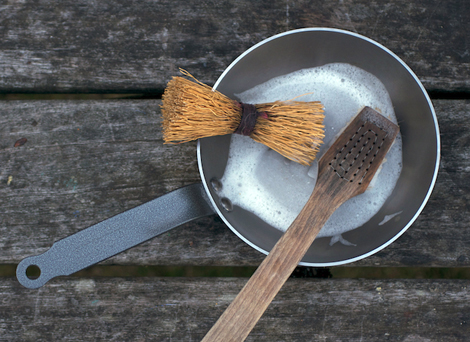 Your pan should be immediately dried with a clean cloth, then placed over a low heat or in a hot (450°F, 230°C) oven for at least ten minutes to drive any residual moisture away and out of the steel's surface. There are some who think it beneficial for the pans to then be baked dry at this temperature for an hour, which should slightly darken the surface, indicating the development of black iron oxide, thought to result in a better fix for the seasoning. There may be some truth in this, and it certainly won't harm your pan, but our feeling is such lengthy pre-seasoning can be considered optional rather than necessary.

Once your pan has sufficiently cooled to touch (please do be careful here) rub in some oil, but before you do it's worth a little consideration of the type of oil that will provide the best results. Traditionally it would have been lard, dripping, or tallow, and it may be tempting these days to use whatever cooking oil is to hand. Almost without exception culinary oils are non or semi drying oils and are used in the kitchen for precisely this reason - being less prone to rancidity in storage or coagulation during cooking: certainly virtues for a cooking oil. It is however these very characteristics that do not lend these oils to seasoning iron. The best seasoning oils are drying oils — that is readily oxidising and tending to polymerisation — oils familiar to woodworkers, painters, and restorers, of poppyseed or linseed, both of which can be found in edible form.

Of the two it’s probable that linseed (or flax oil) provides the more durable finish, and is the easier to acquire, and certainly the one we would recommend. Whatever you decide to use, rub the oil all over the body of the pan using some kitchen towel or a lint free cloth, over the inside working it thoroughly into the steel and up to the lip, not over the handle, but certainly if you are seasoning over a gas flame or in the oven over the outsides and underside of the pan, as this should grant the raw steel some further protection from corrosion - obviously if using a range or electric hotplate the mess this could incur might be considered unwelcome, and perhaps not worth the bother. 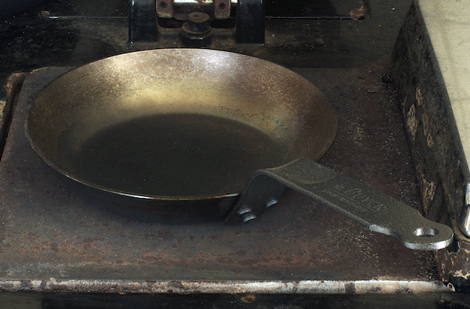 Once you have rubbed oils over the required parts of the pan, take some kitchen towel or a lint free cloth and evenly wipe away the oil until the surface is almost dry. At this point any streaks or variability in the coating will become burnt onto the pan as darker lines, splatters, and uneven colour - nothing that will affect functionality more a slowly fading reminder of a job that could have been better done. Now the pan needs to be heated, either in a hot oven (in excess of 450°F, 230°C) or more likely perhaps given the dimensions of some of these pans a medium to high hob. We think the best advice if using an oven is to put the pan in cold and upside down, close the oven, turn on the heat, open a window or even an outside door, close any interior doors, and go away to read a book, watch a movie, catch up on some paper work. Have a quick check in the kitchen every quarter of an hour or so, and after a couple of hours switch off the oven and allow it to cool. At this point it’s done, or at least it will work pretty much as it should, however it has been suggested that the oiling and heating/cooling process be repeated a further four to six times which will certainly give a better looking result possessing the blackness of aged and well seasoned pan.

If using a hob it’s best to try to heat the pans as evenly as possible, which means using the correct sized ring, starting cold, and slowly raising the heat as the pan warms up, this should result in the most even darkening of the steel. Once smoking the temperature can be reduced to a low medium heat and the pan left for twenty minutes or so, or perhaps as long as you sensibly dare. Once cold the oiling and heating process can be repeated which will again result in a more satisfyingly even colouration, and perhaps a marginal improvement in performance.

That’s the beginning at least, the important thing now is to use the pans, and to allow them to turn black over time — you're aiming for a dense black colour all over. When washing these pans after use, choose your preference — some opt for a quick rinse (no detergent), some a wash with a soft brush and a little gentle detergent (we go for the latter). Try not to leave these pans wet, or sitting in water. If rust spots do occur, it can be enough to give a quick wipe over with a small amount of oil on a piece of kitchen paper. If this fails, follow the steps above. Don't forget, these pans are kitchen workhorses, and shouldn't need too much special treatment - we find ours thrive on neglect! 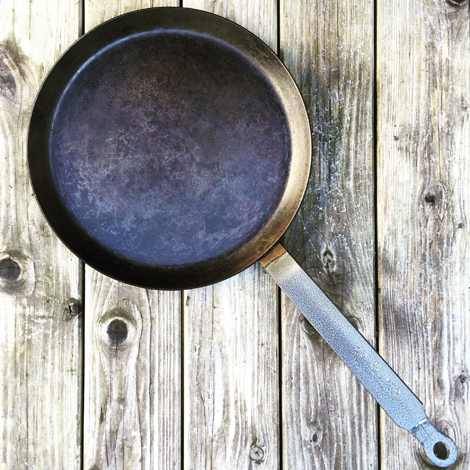