Arts and Crafts, Then and Now
Objects of Use x Compton Verney 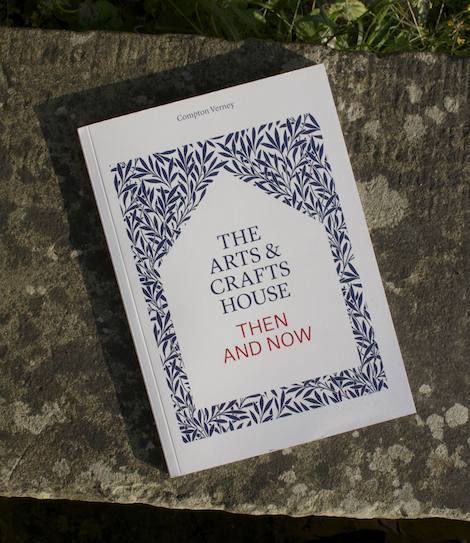 Objects of Use are delighted to have been approached by Compton Verney to curate part of its exhibition The Arts and Crafts House – Then and Now, which opened 27th June running through until 13 September 2015. The exhibition traces the origins, legacy and enduring appeal of the historic Arts and Crafts Movement and its fascination with the creation of the home.

The exhibition was devised as a series of encounters between historic and contemporary works including new commissions by Rosa Nguyen and landscape and garden designer Dan Pearson, as well as the installation of Sebastian Cox’s ‘cocoon-like desk’, commissioned by Terence Conran and built from red oak, cherry and ash, with curved walls of woven red oak strips, enveloping delicate cabinetry. 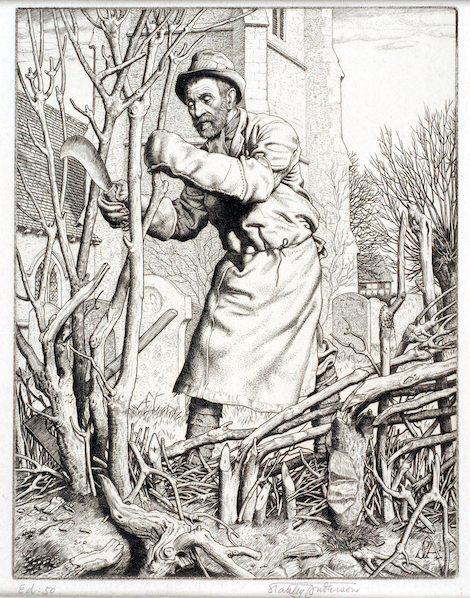 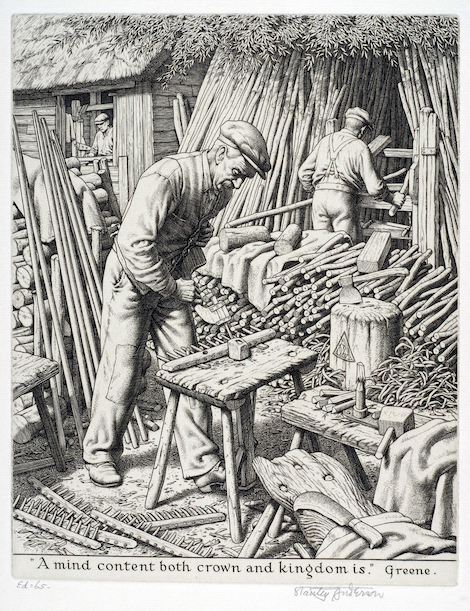 Antonia and Flora, the curators of the exhibition, asked us to develop a curated collection of objects for the final room in the show, with a starting point of a series of Stanley Anderson engravings depicting various rural crafts, which he produced between 1934 and 1953. We were struck by the fact that we sell items depicted in these engravings, either as tools of the trade being carried out, or as the fruits of their endeavour. Whilst these rural activities have no doubt diminished since these engravings were completed, there are still small workshops creating and working with these tools in the UK. Shown here are the engravings featuring hedge-layers (using the kind of billhooks we sell, which are made for us in Devon by Morris and Sons) and rake-makers (our wooden rakes are made in much the same way in Cumbria, by father and son Graeme and John Rudd of Rudd’s Rakes). 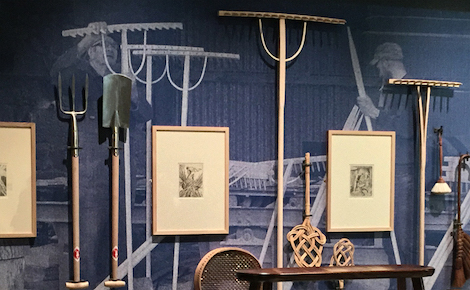 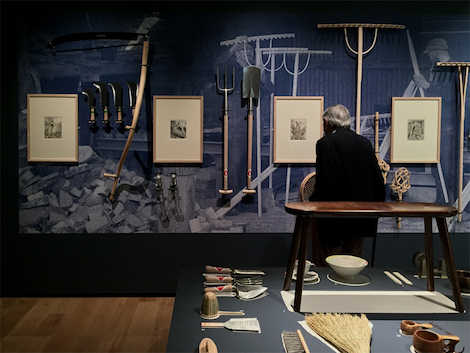 We decided to create our own rake-makers image, of the Rudd’d Rakes workshop - which gave us a good excuse to visit the beautiful area in which this workshop is based. You can read more about this visit here. obtaining a suitable image of the Rudds at work, we enlarged this image to fill the main wall of the space, using this as a back drop for the 6 Anderson engravings we chose, and a range of relevant tools, including two kinds of rakes made by the Rudds themselves.

Antonia and Flora suggested the incorporation of an ‘objects handling gallery’, which we loved the idea - in the shape of a table laid out with a collection of objects, which the visiting public would be invited to handle, giving a much greater appreciation of the quality of the objects than would normally be the case. We included a range of items, from our current store collection, as well as our own private collection and a few items on loan from our makers. This was a first for Compton Verney, and has been extremely well received by gallery visitors. 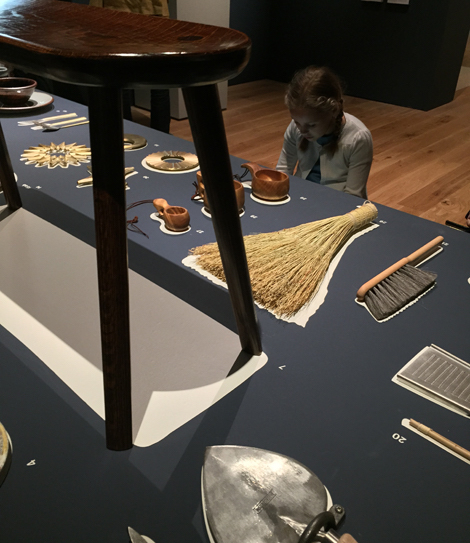 We’ve also hung our Filkins blanket on one wall, with details of the natural dyers Shilasdair, of Skye, who dyed our wool for us with natural indigo dye - and exhibits of pocket and craft knives, made in Sheffield and Japan. Objects of Use has installed a gallery of objects which are representative of the legacy of craft and beauty in the production of everyday objects today. Objects in this gallery are presented for viewers to pick up and experience first hand, for a fuller appreciation of their materials, making, and craftsmanship. 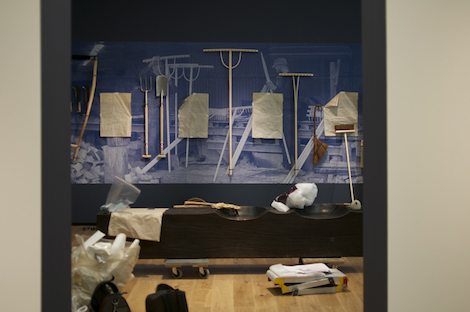 Installation day found us hard at work, installing all the items using bespoke holders which we made using plumbing hardware, which all needed to carefully positioned around spaces reserved for the Anderson engravings. After a long day’s work we stood back to take in the fruits of our labour. 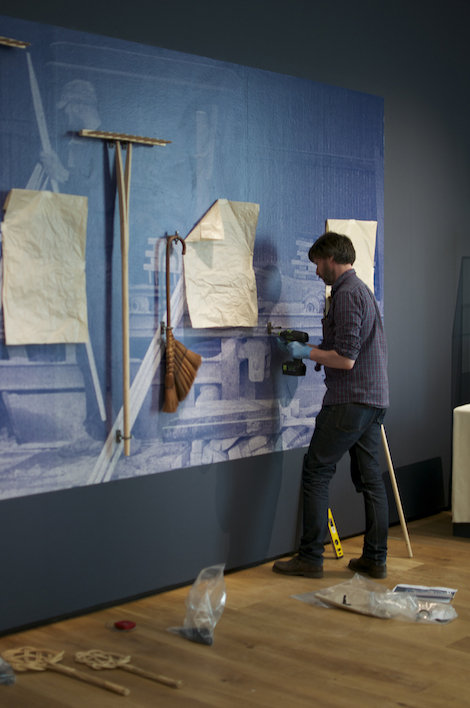 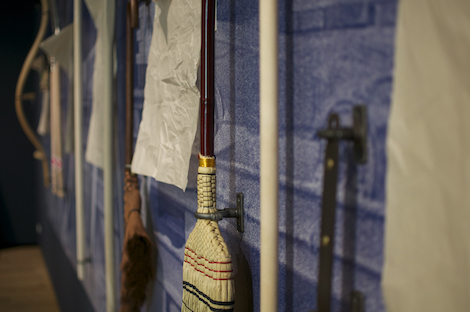 Opening night featured interesting speeches and lots of people, with a chance to have a proper look at the rest of the exhibition. It was really great to see visitors engaging with the handling table, and absorbed in looking at the rural crafts wall. 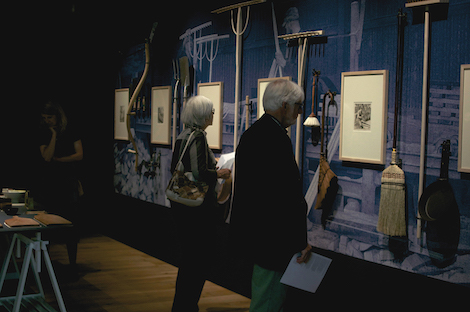 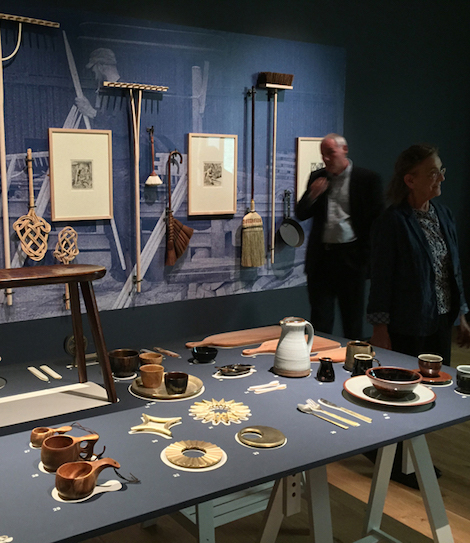 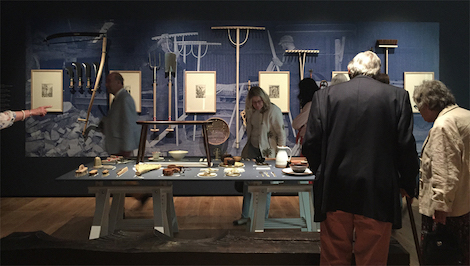 Alongside the exhibition, we have also installed a pop-up Objects of Use shop, beside the Compton Verney shop, where it is possible to buy some of the items on display, as well as other items from our wider collection. 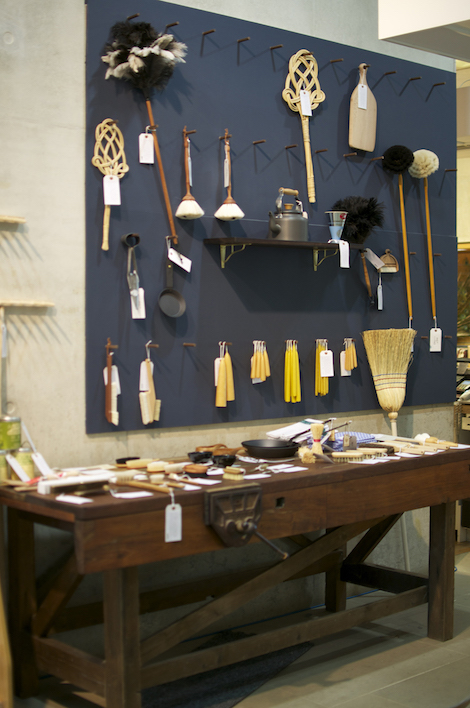 Outside, around a spectacular Cedar of Lebanon (part of the existing 'Capability' Brown landscaping), Dan Pearson has created an extraordinary meadow, inspired by William Morris's 'Trellis' wallpaper design, which will go on developing over the next several years, with different flowering species being encouraged through specific planting. Very beautiful in the evening light on the day the exhibition opened: 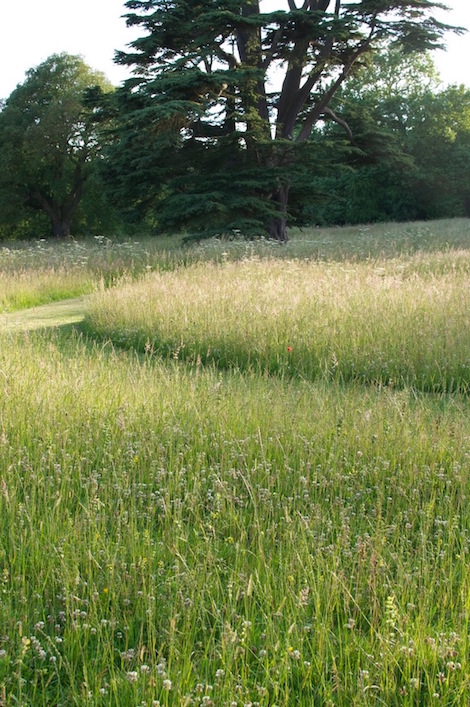 Back in April on a preparatory visit we marvelled at this towering figure standing alone upon the lawns to the front of the house, and couldn't help but to want to discover a little more. Undeniably redolent of The Wicker Man, it perhaps shares a similar source, being developed - by the artist Faye Claridge - after the work of Sir Benjamin Stone, a politician and photographer who around the turn of the twentieth century travelled the country recording what he could of unusual festivals and ancient folk customs. 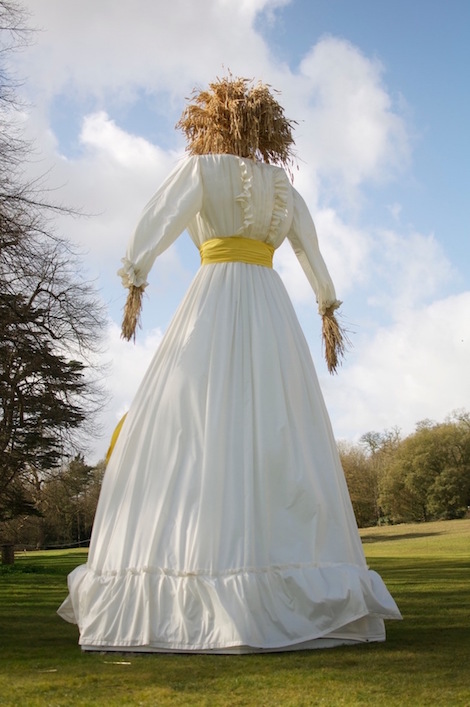 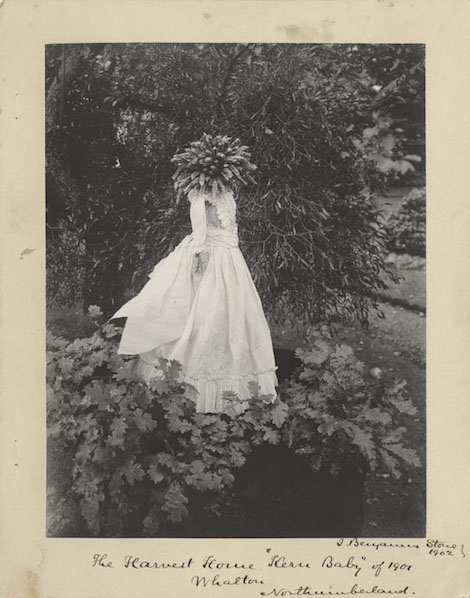 A kern baby or harvest queen photographed by Sir Benjamin Stone in 1901, with descriptive text from William Henderson's 'Notes on the Folk-lore of the Northern Counties of England and the Borders' published by Longmans in 1866. Such festivals remain even today in vestigial form but it is perhaps difficult for us to even imagine a time when the success of the harvest determined the very existence of a community for another year, a lesson all too familiar with those celebrating or writing with such fresh memories of the Great Famine in Ireland. Perché una mostra di falci? 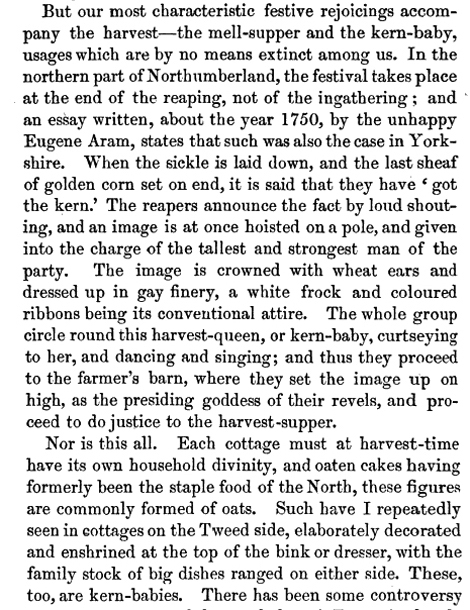 To find out more about the exhibition or the Kern Baby please do visit Compton Verney online or even better in person - when you could also visit our pop-up shop which will be running on site for the duration of the show.  Previous note Next note