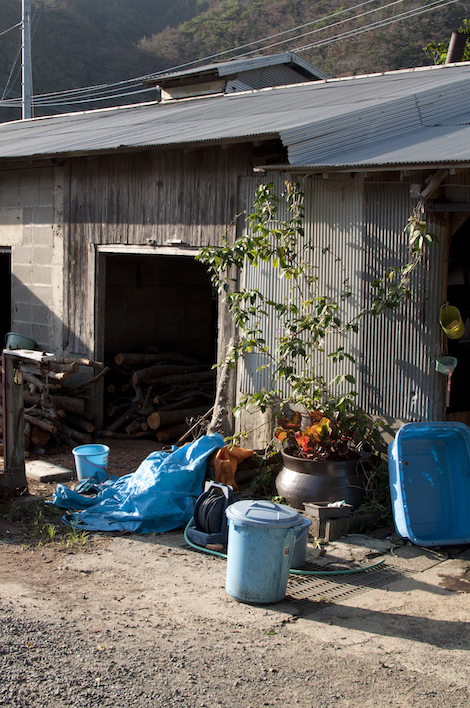 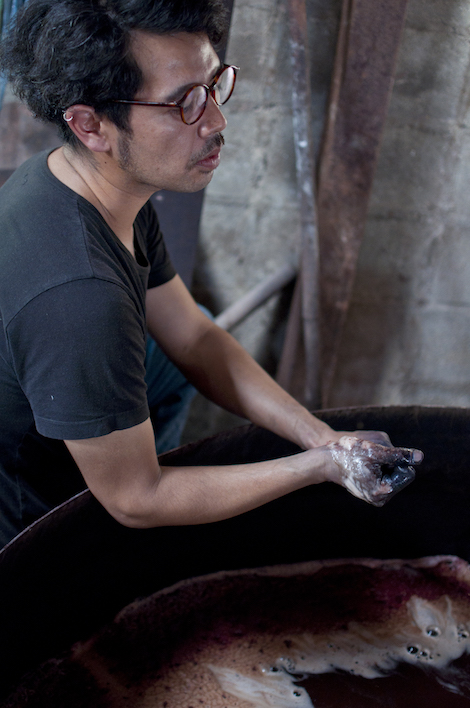 The hands of Yukihito Kanai, proprietor and head dyer at the Kanai Mudding Works - a trade he learned and workshop he inherited from his father - are stained a deep blue from the endless dipping of hands into 'Ai', (Japanese Indigo) and Sharimbai dyes. 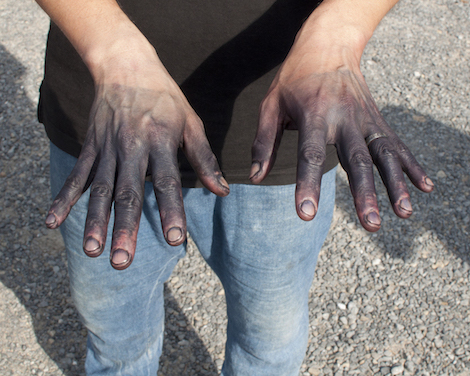 In late November 2015 we visited the mudding works in Amami Oshima to learn a little about their craft - 'dorozome' - a very traditional and natural method of mud dying typically used to create the deep blacks of kimono silks. Under the warmth of a bright Pacific island sun Kanai-san showed us around the workshops where around fifteen workers were busy working through orders from nearby silk weavers, many of whom send their thread and first-stage woven mats (for Amami Oshima Tsumugi Silk Pongee) to the mudding works to be dyed in the mud blacks, browns, and greys. 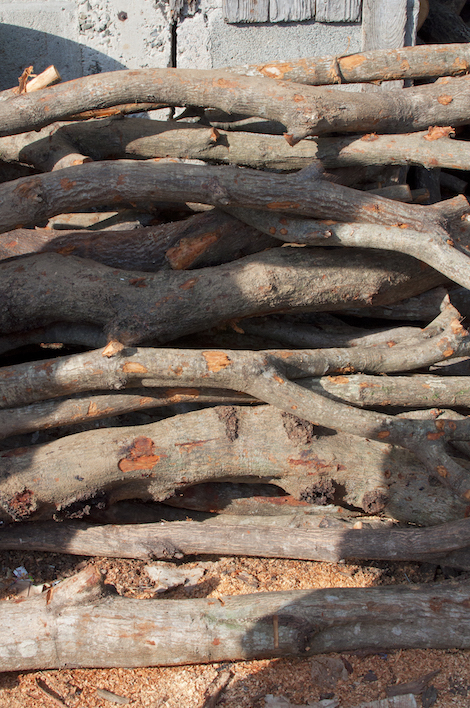 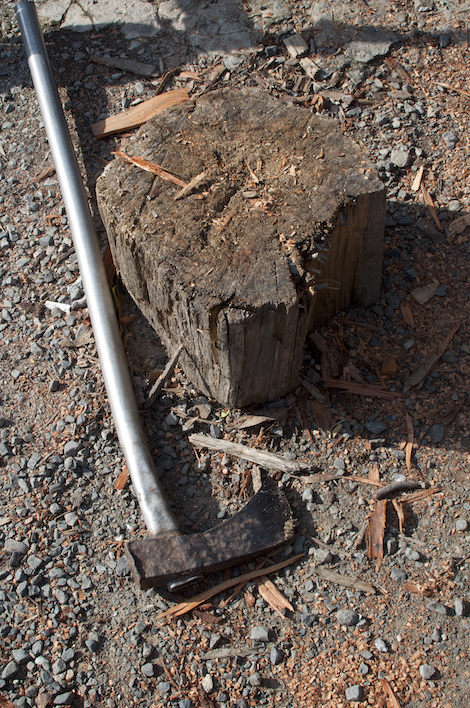 Outside the workshop lies a pile logs, freshly cut from local sharimbai stands - sharimbai is a native evergreen shrub of the rose family also known as yeddo hawthorn, or Japanese hawthorn. The wood, which must be used green and still wet with its sap, is split and chipped by hand before being piled into a large suspended cage, which is then lowered into a heated (the heat being provided by furnace fuelled by used and dried sharimbai chips) water filled vat, which it is allowed infuse for several days, creating the all important tannic base used for dorozome mud dying. 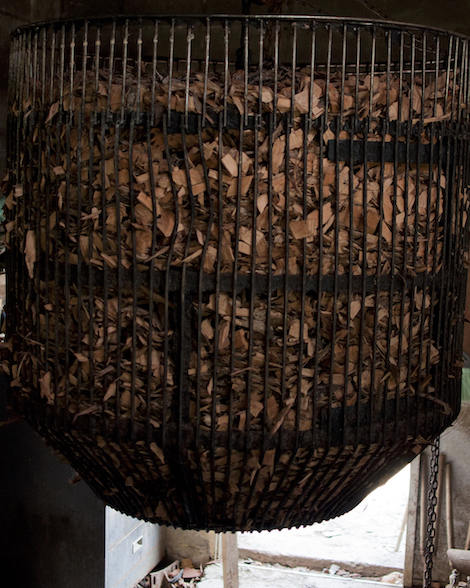 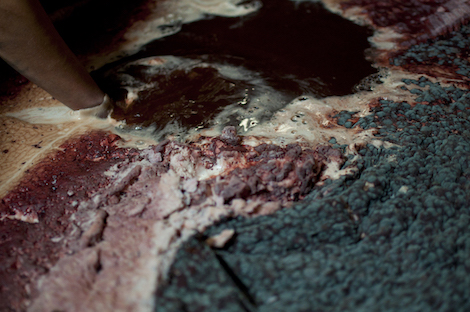 The deep red sharimbai infusion is skimmed and transferred to a series large tubs to one side of the workshop, where the mud dying can begin. 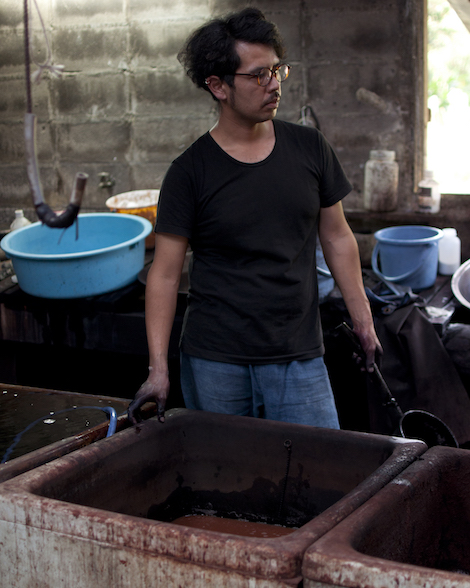 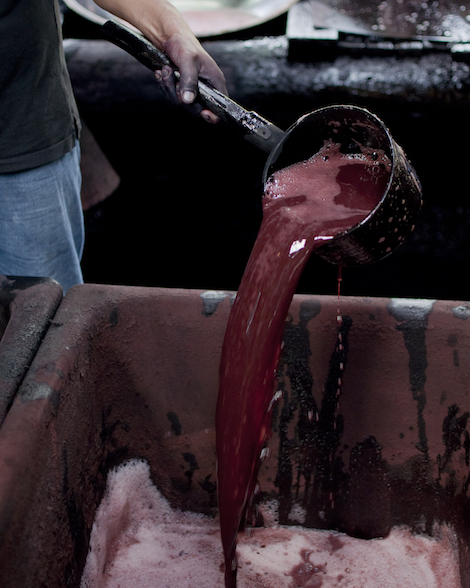 In order to create the deep blacks so typical of Amami Tsumugi, silk is dipped in the sharimbai 'soup' 30 times, before the colour is transformed in the mud baths outside. This cycle is repeated twice more, resulting in a fibres which have been dipped 90 times in sharimbai, and three times in the mud. Greys and browns can be created by adjusting the relative exposure to one or either of the constituents. 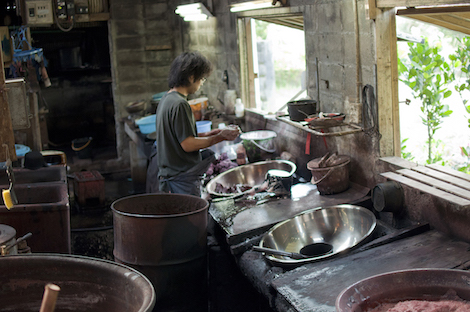 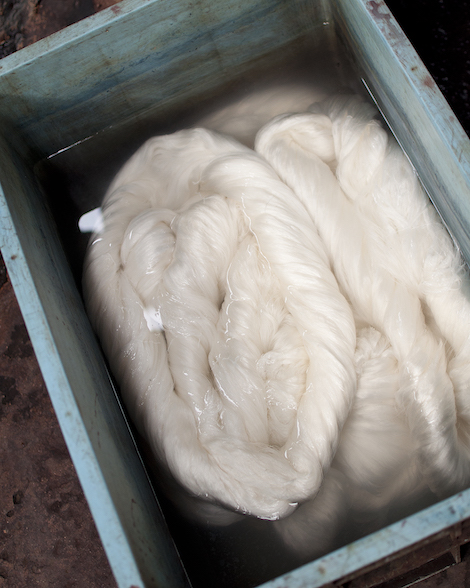 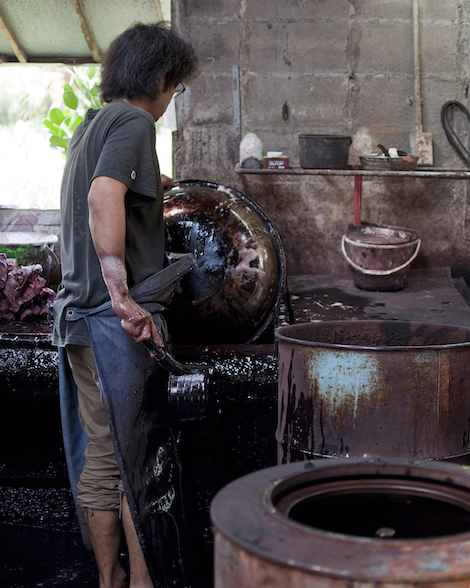 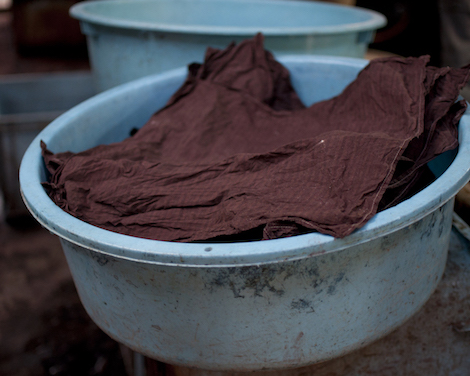 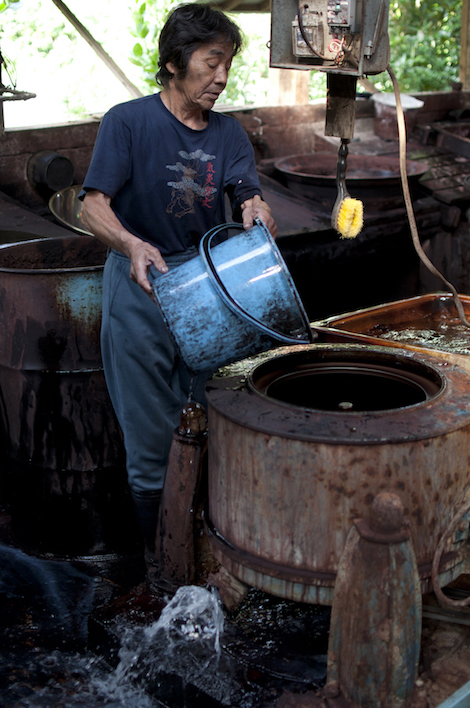 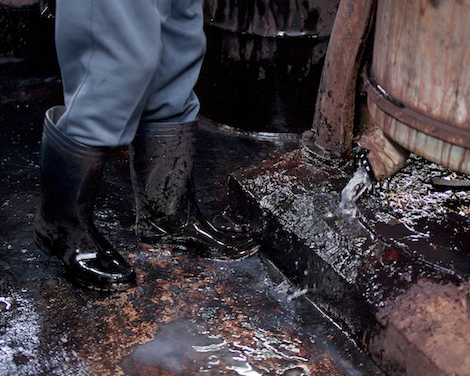 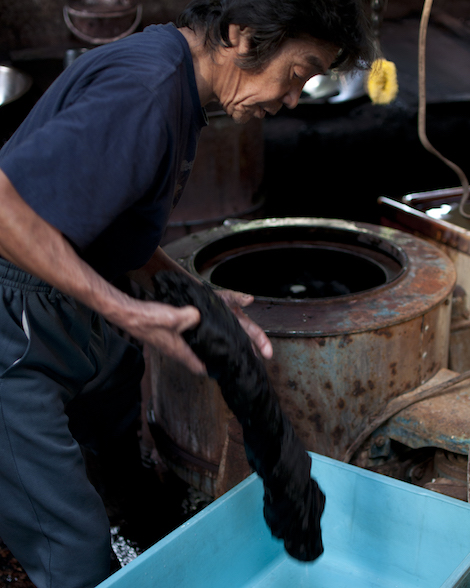 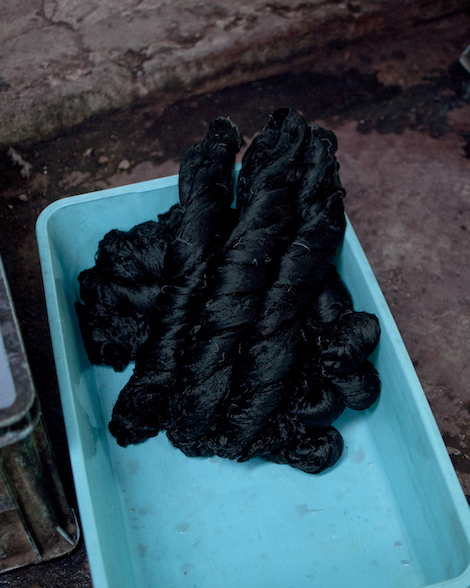 The sharimabi dye is acidic, so lime is used to equalise the pH of the solution (traditionally crushed coral would have been used), before soaking in the iron-rich mud baths - the ferric oxide in the mud reacts with the sharimbai to create the deep, rich black which is so prized here. 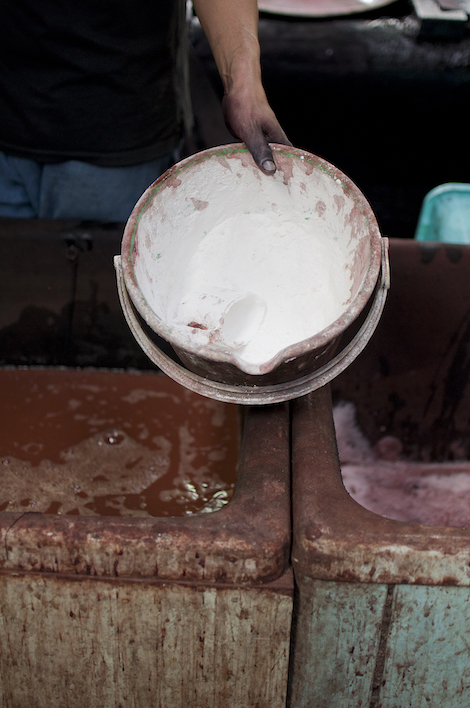 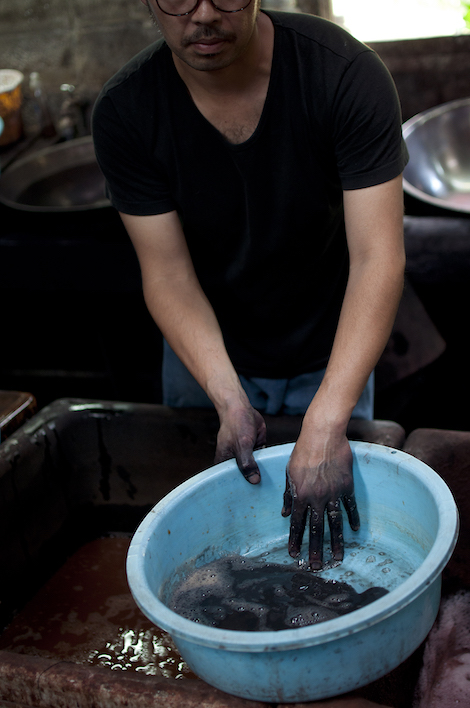 The mud used in the dying of silk and cottons is taken from the mud of waterlogged land beside the workshop, which is prized for its iron content. Rather than draining the land of its nutrients and allowing it to become useless, the workers replenish the mud using the dead leaves of the Sotetsu palm plants ('so', meaning 'revitalise', 'tetsu' meaning 'iron') growing on the hillside beside the site (seen here with brown leaves). After the day's work is finished, the workers climb up to where running water flows down the hillside to wash and clear the naturally biodegradable dyes from their hands. 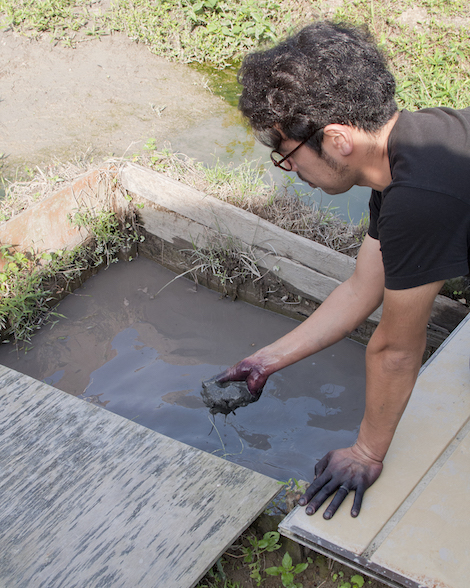 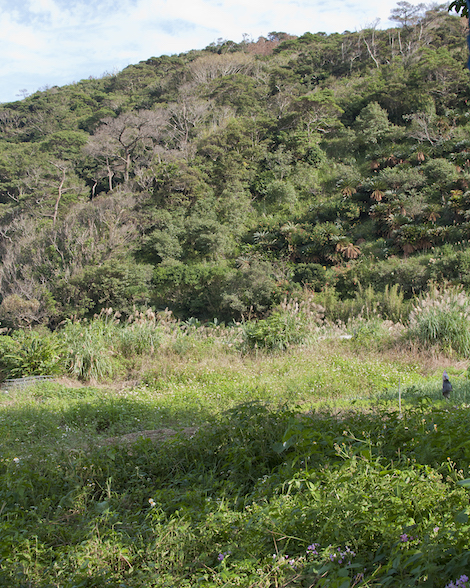 Dyers at the Mudding Works also hand colour fabrics with Ai, or Japanese indigo - from another locally growing annual. To the side of the workshop all kinds of fabrics and yarns hang drying in the sun. 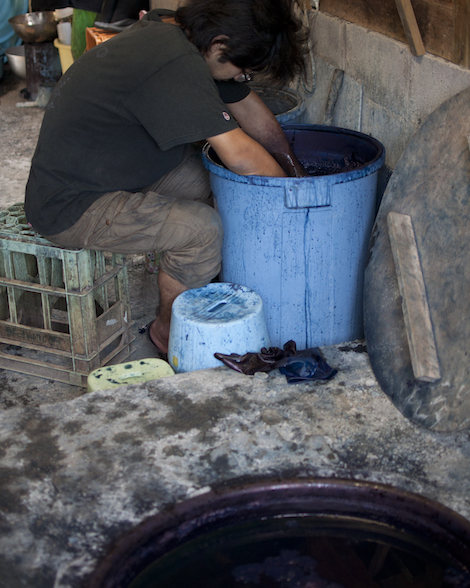 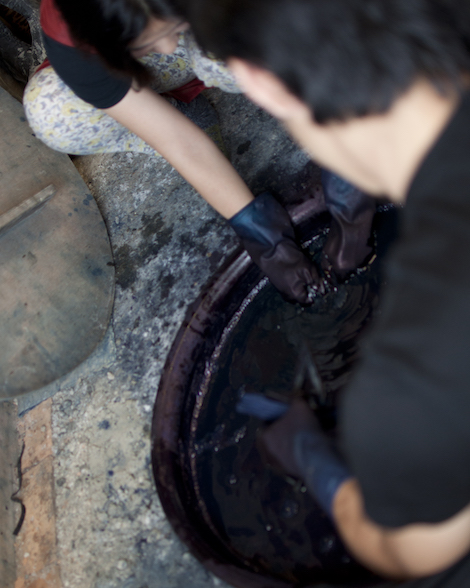 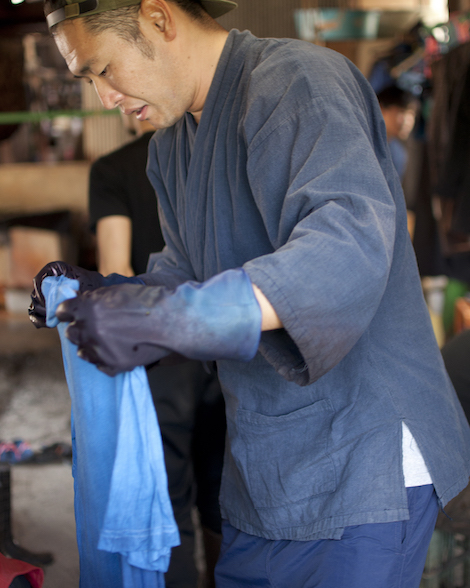 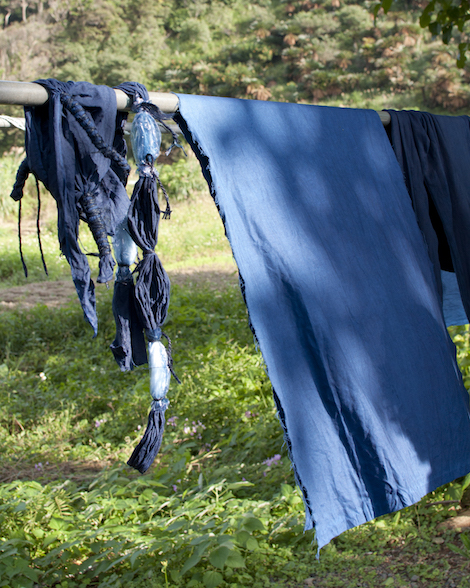 On display in the gallery-come-studio are beautifully dyed cottons and linens, with natural dyes combined to great effect, as well as a spectacular black mud dyed guitar. 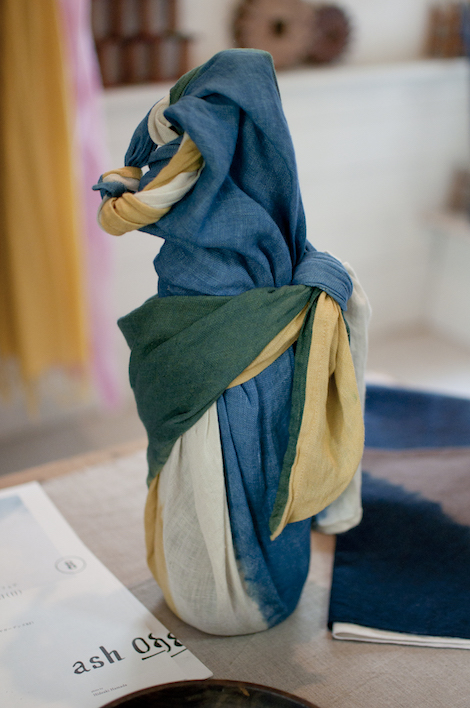 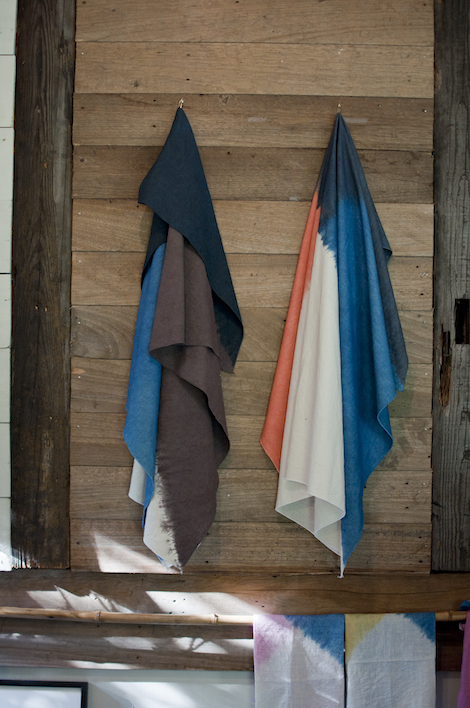 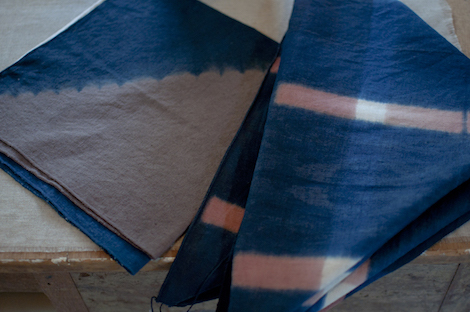 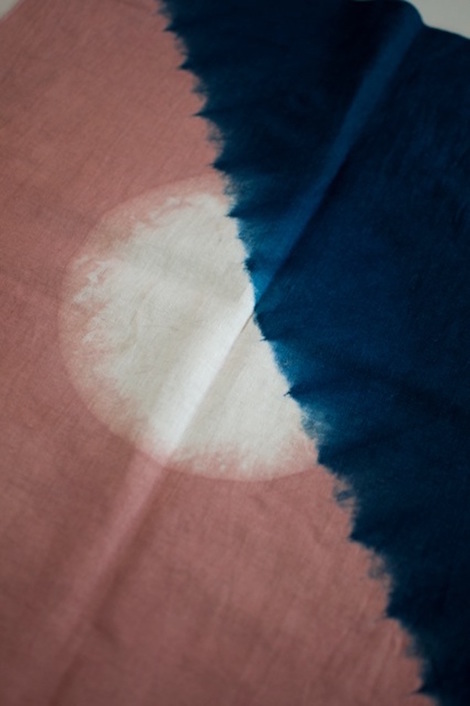 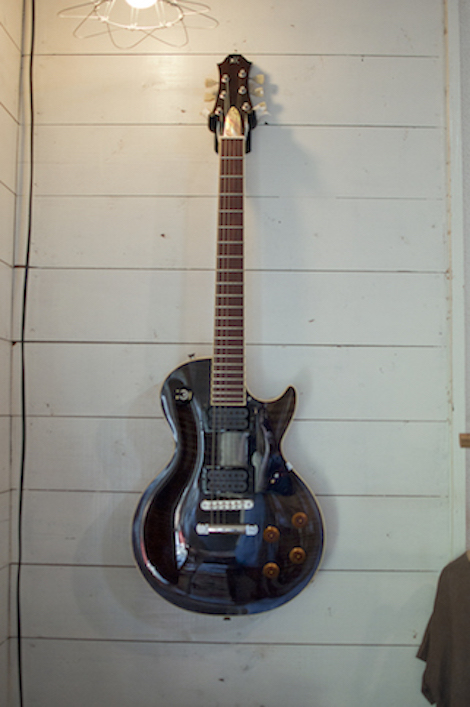 Related articles can be found here:  The Makers,  Website update